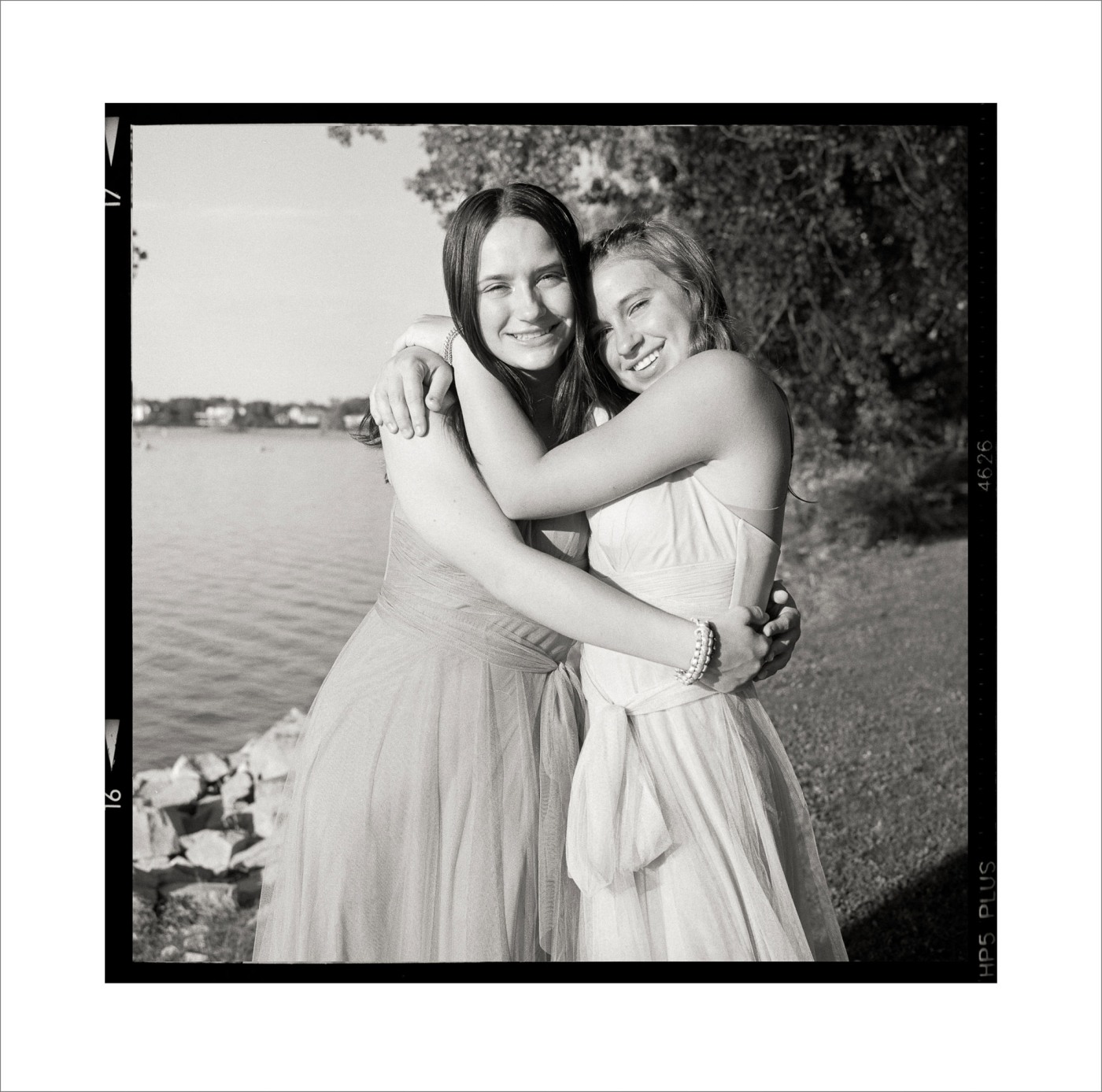 I had a portrait shoot this week with a pair of sisters, ages 15 and 16. I told them to wear fancy formal dresses and meet me at the lake in my town. Their mom drove them over and the two girls had a look of embarrassment and annoyance at being dressed like that when I introduced myself. I told them they were the best dressed out there, that they were going to look amazing in photographs and I got to work.

I had already set up the Wisner 8×10 camera with its 12″ Goerz Dagor lens that I bought off the estate of Tony Venti, a 1950s New York City commercial photographer who photographed in his studio many celebrities including Marlon Brando. Perhaps with this very lens. The film was Arista 100–I had three film holders with me but I knew that one was going to have to do, just two frames, as these teens didn’t look like the waiting type.

The Rolleiflex 3.5F was loaded with Ilford HP5, my go-to black and white film, the one I know I can do anything with. I figured once I was done with the critical focus, framing and setup of the large format camera, the medium format Rollei would be a welcome change for the girls.

Mom held the reflector in place. Framing and focus were double-checked. Light meter reading made. Then two frames were exposed. Click. Click. Moving on.

Then in was off to the Rolleiflex. It was sunset and the light was radiant. I turned them into the light and focused my Zeiss Planar 75mm lens on them. I didn’t give them specific posing directions, I just asked them to try different things as I thought of them, and let them set their own pose.

One thing I like to do is photograph the in-betweens–those moments when they’re not posing, when they’re just being sisters playing for the camera, having fun, almost like I’m not there.

Here are both the poses and the in-betweens.

I explained to them that I wasn’t only making this portrait for them and their parents. I was making it for their family members in 2122 and many generations to come, so that they would always know them, who they were, what they were like. That a framed photographic print makes that possible, since 1s and 0s fade away. It’s a kind of time travel for people in the future if we think to make these photographs now.

I’ve made probably 100,000 photographs in my career so far, including photographs of U.S. Presidents, digintaries, celebrities, musicians, authors and movie stars. And every one of them was to market their campaigns, get them elected, sell them, get people to buy their latest offering, or otherwise make them more powerful and richer.

These are the photographs, the ones right here, that mean the most to me to make. Photographs at a quality that is so high in a world of digital (mostly phone) pics–snapshots that are given a glance, a like and a swipe at best–these are printed photos that are hung on a wall in a place of honor at a home, their very presence a comment on the importance of these people to the family, and something that will have lasting value. And when I make them and post about them, I inevitably get other photographers contacting me saying I inspired them to do the same thing. That’s what I live for. That’s my photographic purpose.

Sure, I’ll keep making the advertising and commercial photographs–they’re necessary to pay the bills. But if you ask me if I am excited about photographing some celebrity, I’ll say sure, it’s cool, but I’ll probably also tell you about Anabelle and Morgan, the sisters you see above, and how they’re the ones that really make me look forward to being a photographer on any given day.

Them and their great-great-great-grandchildren, they’re who I’m working for. My photographs are my legacy and I am honored to have printed photographs hanging in home galleries literally around the world.

2 thoughts on “Sisters Portraits: 8×10, Rolleiflex and the In-Betweens”